The Leopold FC660C keyboard will melt away into your environment. It’s smooth in sound, in movement, and in looks. That’s not to say that it’s muted or flat - you can hear it and there’s a healthy heft to its body, but it becomes a calming constant on the desk rather than drawing attention. It's a keyboard suited to someone who wants a handsome, understated tool.

I wrote about why I switched away from the Moonlander to this Leopold in an earlier post, so here I’ll just focus on this keyboard’s qualities and requirements.

The Topre switches are as nice as others told me they would be. I've not tried all kinds of switches out there, but I do like these for actually typing more than any others I've tried (Cherry switches of a couple colors, etc.). I don't focus on the sounds they make for the most part. Occasionally I'll have a quiet moment and enjoy the soft 'thuck', but they blend into the board for the most part. I've never noticed anything about the switches I didn't like - mostly because I failed to notice them after using the keyboard for a few hours. See video at the end for example typing.

The coloring and presentation of the keyboard is basically absent - matte black with matte black letters that may as well not be there at all. I have to get my faces about a foot from the keys to read what they have written on them, which means that I never do. If I mistype a key, I keep searching with my fingers to find it. An added benefit of this is that I don't really have a reason to swap out keycaps to match the MacOS input types - I just simply don't notice.

The construction of the base board is solid. It's heavy enough that it doesn't move much during a day's work, the rubber grips do their job, and the board doesn't flex when ou pick it up or smash on the keys. Again, I don't have much to say here because it simply does the job quietly and stonily.

The board's key layout is somewhat undesireable. The Esc key in the top left takes the place of a tilde and/or backtick key, which is a basic necessity for me as a programmer. The Insert key in the top right is never, ever used in my history of programming on computers. Other than those two gripes, think the layout is fine. I have, as normal, the caps lock remaped to Ctrl and the other Windows-based keys mapped to their MacOS counterparts.

To handle the escape and insert key mistakes, I use a short bash script to remap the escape key to tilde/backtick and also remap the insert key to escape. I run it every time my computer starts/restarts and that's it.

The other big required adjustment for this board is a wrist rest. I've made makeshift wrist rests for my keyboards over the years from cloth and nortebooks and foam and other things. Then, I used the Microsoft Sculpt for a year, which spoiled me. The Moonlander had decent, if simple, rests as well. I highly recommend a good wrist rest - complimenting whatever keyboard you choose - as the number one ergonomic improvement for people typing on keyboards all day.

The Leopold FC660C sits pretty high off the table. I haven't measured it, but the keycaps site a couple fingers up at least. I tried using this keyboard without a wrist rest and had shoulder/neck pain within an hour. Using it for a full day that way made falling asleep at night difficult. Previous rests that I had lying around weren't tall enough, so I had to make a new one.

This time, I wanted to make a nice rest to go along with this nice keyboard. I also wanted something I could easily manipulate, so I settled on trying to fashion one from wood. I brought the keyboard with me to the lumberyard and literally laid out pieces of wood on the ground, aligned the keyboard to each and tried typing for a bit to compare. People must have thought I was nuts.

Eventually I found some beautiful oak bannister lengths that were the perfect height. I purchased a few feet of it and brought it home. After experimenting with a few different lengths, I found a size that didn't take up much space on the desk and  allowed my hands room to breathe. I also experimented with different stains, but found that the natural grain of the wood was the most pleasant for long typing sessions.

And so now I have something pretty comfortable - no pain issues with this setup - that is really quite a set-it-and-forget-it system. With the wired connection and solid construction, I expect this keyboard to last years. I look forward to not worrying about it.

Switching away from the Moonlander keyboard

After using the Moonlander keyboard [https://www.joshbeckman.org/ergodox-moonlander-week-3/]for a number of months, I've now switched back to
Jul 16, 2021
1 min read
Dec
16 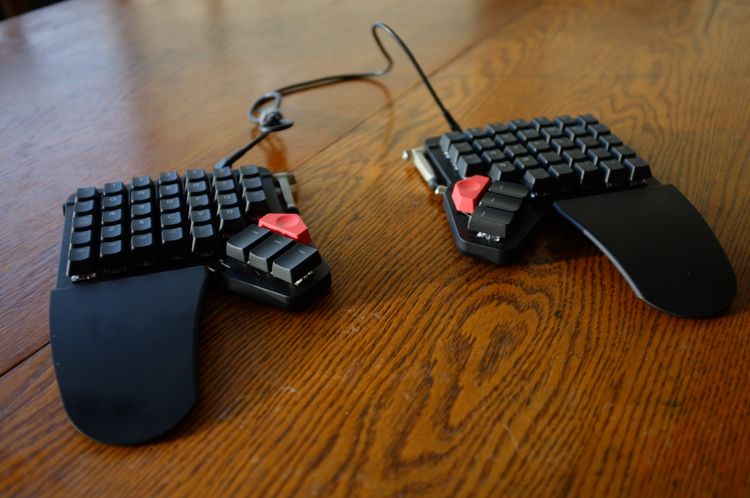 I would not have purchased this machine with my own money. No one needs this nice of a keyboard. But
Dec 16, 2020
4 min read